Colwell Arts Centre is currently closed due to National Lockdown restrictions due to COVID19. Please contact us at glosmusic@gloucestershire.gov.uk for further information.

Whilst we are unable to provide you with our normal music lessons, music centres, county music groups and events due to Government restrictions we are putting our efforts into providing you with some educational, fun, inspiring links to enable you to keep your music making going! Click here for more information.

The National Festival is the culmination of regional heats which were held last November.  Each band performing was chosen on their performances at these heats. 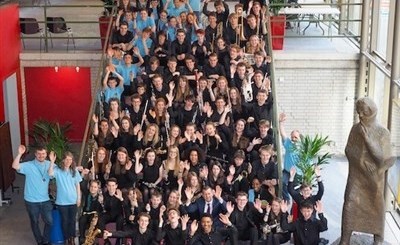 The event, which is the UK's largest competitive wind and jazz band festival, was held at the Royal Northern College of Music in Manchester.

Two of our members, Tom Thisleton and Dan Hart, tell us more about the day:

"The day began with an early start, leaving for Manchester in two coaches, packed to the brim with musical potential and enthusiasm!  By the time we arrived in Manchester, we were eager to begin the day’s activities. Before our groups performed we were treated to a concert by an Army big band, playing pieces such as Come Fly With Me and Rhapsody in Blue.  This was then followed by the first group of the day - Gloucestershire's very own Brookfield Music Centre Jazz Band.

After a stellar performance, they received a Gold Award.  Following this they were given adjudication by a professor of music at RNCM. This provided the band with a high level of feedback on their performance even allowing the musicians to play extracts again under the adjudicators guidance.

After a brief break it was time for GYJO’s performance, after which they were presented with a Silver Award. The criteria varies for the different types and standards of bands, and the feedback is therefore relevant to each band respectively.

Whilst GYJO were performing, some of the other musicians had a look round the trade stands. There were people to talk to about careers in the military and instruments to try out. There were also workshops throughout the day, including a saxophone masterclass, which some members of Gloucestershire Music's groups attended.

The final performance from GM was GYWO, and they were presented with a Gold Award for their performance. Particular praise was given to the extensive percussion section, as they were the only band in the competition with wine glasses and djembes in the same performance!"

NCBF is a fantastic festival which has a vibrant atmosphere where young musicians, as well as older ones, can grow and mature in their musical understanding. It's a fantastic opportunity to take Gloucestershire's music to the next level, and give our musicians a chance to perform at one of the best musical establishments in the country.